What is a garden roof?

What is a garden roof? 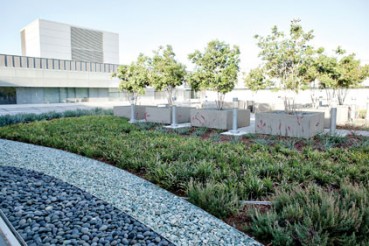 Garden roofs are rooftops planted with vegetation. The garden roofing system uses plant life for roof covering instead of the traditional roofing materials like tile and shingles.  A garden roof is also known as or rooftop garden. Garden roofs can be partially or completely covered with a vegetation over a waterproofing membrane.

There are two types of garden roofs that exist: intensive and extensive.

Intensive garden roofs have thick layers of soil usually, 6 to 12 inches or more, that can support a broad variety of plants. 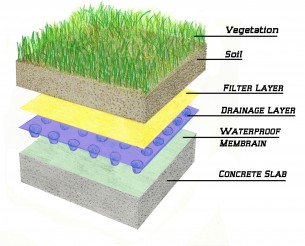 Extensive roofs are simpler garden roofs with a soil layer of 6 inches or less to support turf, grass, or other ground cover.

Garden roofs began in the 1960’s in Germany but in recent years have become very popular. Today, it is estimated that about 10% of all German roofs are garden roofs. Recently in France, a law was passed that requires new buildings in commercial zones to be partially covered in either plants or solar panels. Garden roofs are also becoming increasingly popular in the United States, although they are not as common as in some parts of Europe. The popularity of garden roofs is growing due to global warming and environmental issues in the world today. Garden roofing is a widespread alternative to the traditional roofing because of the environmental benefits and savings for heating and cooling.